Lauren Scott harp
Harps across the North is a new 15 minute multi-level harp ensemble piece in three movements composed by Lauren Scott for mixed ability harp groups. The piece has parts that may be taught by ear to those who can't read music. More and more people are starting to learn the lever harp as ‘life-long’ learning and with affordable small lever harps and even cardboard kit harps the amateur harp community is ever growing. Fusing funky contemporary harp techniques with groove, the pieces are aimed at intermediate level players to learn to play in a workshop setting. The initial performances are with three (separate) amateur harp groups across the north of England during 2020, with further performances later in the year from harp groups in Wales and Australia.

Lauren Scott gratefully acknowledges support from PRS for Music Foundation.
​An in demand and experienced freelance harpist, Lauren Scott has recently embarked on a creative compositional journey having only started writing music in 2018. Since then she has published two volumes of music for lever harp, her music has received praise from harpists and harp societies worldwide and she has had four of her pieces set on the Trinity grade syllabus. In 2020 her debut solo CD, Beyond the Horizon which features eight of her compositions alongside works by Peter Maxwell Davies and John Cage will be released on the Avie Records label. She will also be performing a concert of her solo harp music at the World Harp Congress in Cardiff before premiering her new harp duo piece in Perth, Australia in August.

Hope is the Thing with Feathers

Based on the poem by Emily Dickenson, Hope is the Thing with Feathers is a Round in four parts and incorporates preparation with cardboard in the middle octave to create the effect of pitched drums. Inspired by the sense of 'ritual' and 'power' behind the New Zealand Haka, the Maori word for "hope" - tumanako - is broken up into separate syllables and woven into the Round so that the word in it's entirety is chanted three times throughout the piece.
Hope is the Thing with Feathers was written for the Old Malton Harp Group in North Yorkshire, and Lauren will workshop the piece with them on 15th March 2020.

Based on the Rain Stone poem by Simon Armitage, Freshwater Tears is written in four parts and uses various extended techniques to create the effect of raindrops including xylophonics, percussive tapping on the harps and a special tremelo xylophonic glissando technique which Lauren has developed. This piece is inspired by the joy of rain which is so beautiful demonstrated in the poem,
Freshwater Tears was written for Harps North West in Cumbria, and Lauren will workshop the piece with them on 16th May 2020.

the sun and her flowers

Based on a short poem by Rupi Kaur, the sun and her flowers is written in four parts and uses various preparations including paper woven between the strings to make the sound of a Kalimba, paperclips & coils placed on the base of strings to make the sound of buzzing bees, and clips placed on a bass note to sound like a joyous and raucous rattle in the final part of this piece. After a calm introduction of short cadenzas the sun wakes up and the sound of the kalimba creates a groove over which the flowers dance.
the sun and her flowers was written for Harps of the North run by Anita Aslin, and it will be premiered by them in Stokesley, North Yorkshire on 1st March 2020 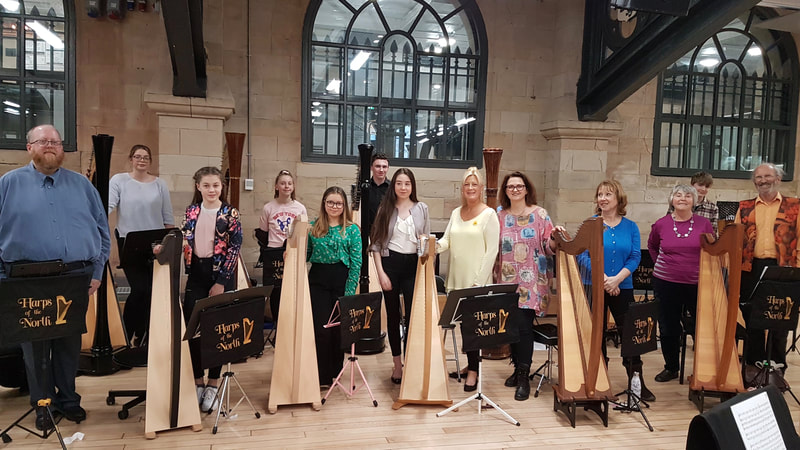 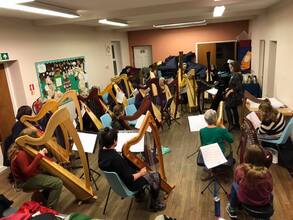