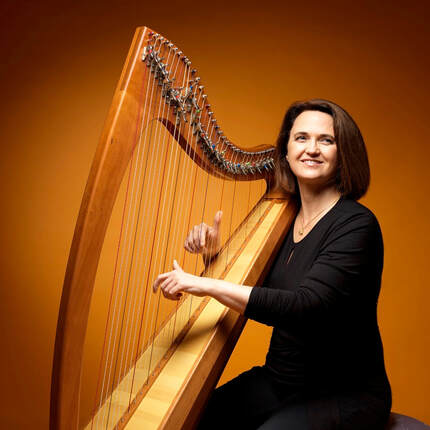 LAUREN SCOTT fell in love with the harp aged four after seeing a historic lever harp in a museum in Australia. After two years of pestering her parents she began harp lessons aged six when her family moved back to England.

Lauren studied harp at Trinity College of Music and has a busy portfolio musical career.  As an established and in demand freelance player, she plays guest principal harp with many of the UK’s leading orchestras and chamber groups as well as pursuing her own projects. Her harp playing has led her to performing in venues across the UK from the Royal Albert Hall to West End shows to commercial recordings to live broadcasts on radio and TV.

Lauren Scott has recently embarked on a creative compositional journey having only started writing music in 2018. Since then she has published two volumes of music for lever harp, her music has received praise from harpists and harp societies worldwide and she has had four of her pieces set on the Trinity grade syllabus. In January 2020 she was a recipient of a PRS Foundation Women Make Music award to compose new harp ensemble music for her project, Harps Across the North. In March 2020 her debut solo CD, Beyond the Horizon which features eight of her compositions alongside works by Peter Maxwell Davies and John Cage was released on the Avie Records label.

Lauren has been actively involved in the UK harp community, acting as Chairman of the United Kingdom Harp Association for 5 years. Keen to support the next generation of musicians, Lauren founded a not-for-profit organization in 2010 that with the help of volunteers hosts eight concerts per season, combining professional musicians with local young musicians whilst raising money for local charities. Along with an annual Youth Music competition, over 500 young musicians have either performed or taken part in workshops with the concert series thus far.

A lifelong passion for the lever harp has led her to composing new enjoyable and accessible music that is influenced by her diverse experiences in the music industry; from regularly performing in symphonic and chamber orchestras, to working in pop sessions and collaborating with composers in the contemporary classical sphere.

Lauren Scott plays on Salvi, Camac and Starfish harps.
​
LIVE ONLINE HARP TUITION
With over 20 years experience of private harp tuition, Lauren Scott also provides Live Online Harp tuition to anywhere in the world and has over 10 years experience of teaching live over the internet. Lauren has internet students based all over the world, and has taught harpists in Europe, Australia, United States, Middle East, Africa & South Korea.